Madhya Pradesh perhaps being the most intriguing of the five states featuring a thrilling and unpredictable direct battle between the BJP and the Congress, the state went into polls on November 28. The Madhya Pradesh assembly election 2018 results will decide the fate of 2,097 candidates who are in the fray.

On the BJP's side is the 15-year-rule of Shivraj Singh Chouhan who is a popular face, along with the electoral potency of Prime Minister Narendra Modi. The ruling BJP in its manifesto titled - “Samridh Madhya Pradesh Drishti Patra” is focused on overall development of the state with special focus on women, agriculture and education sector.

Here are the highlights of the BJP's MP electoral manifesto:

Distribution of loans and expanding irrigation area: In its election manifesto, BJP has promised to distribute loans worth 40,000 crores among the farmers and also to expand the area of irrigation to 80 lakh hectares in the next 5 years if voted to power. Furthermore, it has also assured to build a university to promote food processing.

Focus on women empowerment and health facilities: Releasing a separate manifesto entirely focused on women in the state titled “Nari Shakti Sankalp Patra”, the BJP has promised to install sanitary napkin vending machines and a two-wheeler scooty to every girl who gets more than 75% marks in the class 12 board exams, among other promises.

The BJP, led by Chief Minister Shivraj Singh Chouhan, has been in power for since the mid-noughties, and therefore, anti-incumbency was touted as being a major factor in the polls that were held on November 28. However, it wasn't the only one, with the Congress getting embroiled in controversy after controversy, especially over Kamal Nath resolving in a video to target the Muslim vote and Raj Babbar making personal attacks against the Prime Minister. The Congress also suffered from infighting with senior leaders Jyotiraditya Scindia and Digvijaya Singh having a heated spat in front of Rahul Gandhi over ticket distribution.

However, the various exit polls weren't able to give a single answer as to who will win the state. Three exit polls gave a slight advantage to the Congress in the 230-member assembly, including CVoter which projects a wafer-thin majority, whereas on the other hand, the BJP was pegged to get a majority on its own in the remaining two polls.

Here are the numbers: 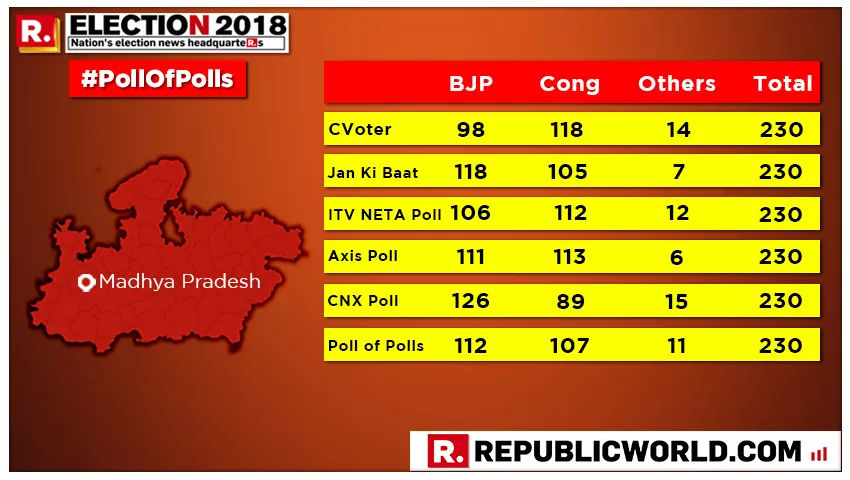 Follow all the updates from the State Assembly Elections 2018, only on Republic World.